How to deal with any guestcard in Knock that is not a prospect (e.g. vendors, residents, duplicates/errors)

Written by Lauren Neal
Updated over a week ago

Anyone who calls one of your Knock tracking numbers will create a guestcard in Knock. Most of the time this is an actual prospect, so this behavior is expected/desired. However we have found there are always the following people who are not prospects:

Now in Knock, there is an easy way to flag these Guestcards, so that they are not counted in your To-do list/engagement score, but still showing up in the Call Report or other reports where desired.

Here's how to mark a guestcard as "Not prospect":

At the top of the Guestcard, click the icon to the left of status for Mark as 'Not a prospect':

A list of possible reasons will populate. Select the most applicable reason (in the below example I selected "Vendor") and then click Save: 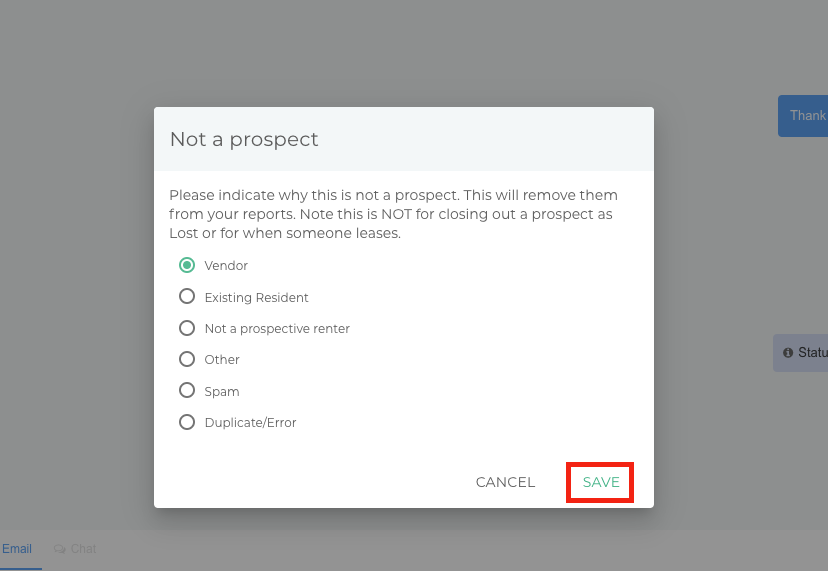 That's it! Now you can see at the top of the guestcard to the left of status that "Not a prospect" icon is red, meaning this guestcard will not be counting against your engagement score.

Note: The icon will not turn red if you select "Duplicate / error", because duplicates categorized differently on the backend.

This will accomplish the following:

Pro tip: If this phone number calls in the future (or if the email on file for them emails), that messages will still show up in Knock under the same guestcard. The difference is it will not show up on your to-do list as someone you need to followup with.

Did this answer your question?